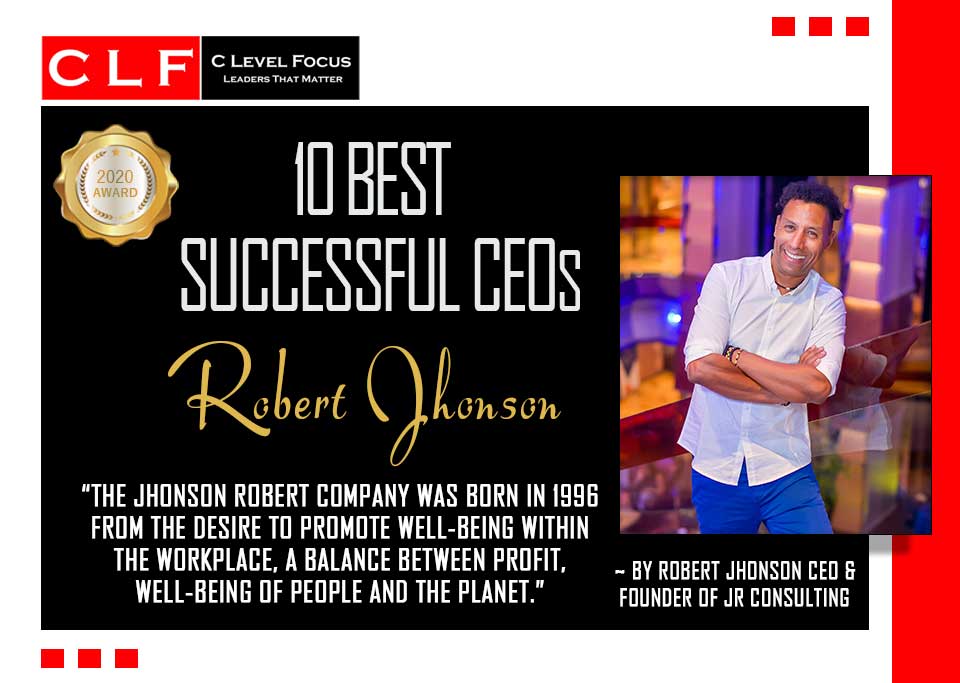 Offering Opportunity of A Lifetime

Robert Johnson thanks the hardships he had to face since his childhood, for molding him into one of the most sought-after leaders today. He has culminated into an internationally renowned author and speaker in the fields of Self-Development, Analytics and Business Strategy, Leadership, Lifestyle Medicine and Spiritual Growth. His work is founded on a rigorous understanding of every client’s institutional context, sector dynamics, and macroeconomic environment. “I study the markets, trends, and emerging best practices, in every industry and region, locally and globally,” says Robert, CEO & Founder of Jhonson Robert Company. “All consultants of Jhonson Robert Company contribute time and expertise to developing these insights, because they are integral to my ability to help clients achieve their goals. My investment in knowledge also helps advance the practice of management.”

The Jhonson Robert Company was born in 1996 from the desire to promote well-being within the workplace, a balance between profit, well-being of people and the planet. Many of Robert’s client companies asked him for strategic solutions to increase their business, but they were amazed when he presented a strategic project starting from the well-being of all stakeholders (employees, owners, suppliers, customers and communities). “I must say that in the beginning it was very hard to be able to explain my vision of business to CFO and CEO and even today, except for multinational companies, well-being within organizations is not conceived as an extraordinary source of profit and competitive advantage,” says Robert. “After several closed doors in my face I invented the motto: ‘stand out or become extinct’ (lead or dead), mine was an invitation to companies: ‘There's no middle ground’.” And, Robert’s idea began to see success when customers began to taste the value of balance in life, not just numbers on a sheet: a winning team and extraordinary results can be obtained without stress, sleepless nights, chronic diseases. “In 2000 I added a further concept of distinction: "fear-free organizations", for me a business is intelligent, it is successful, when it is not based on fear, on the threat of dismissal, but when it is based on the freedom to be able to express opinions and talents.”

Robert says that as entrepreneurs, one has to learn about the marketplace by going through the "school" of transactions. After they have become trained in that world and start to dream about creating greater value than the rest of the industry, it's time to move into the Transformation Economy. A great example of this he quotes of that of Starbucks. “They sell coffee - beans, water, cup - just the same as every coffee outlet that charges a dollar for a cup of coffee. But Starbucks charges five - and people love the experience!” he explains. “Starbucks has special drinks made with special techniques, served in special packaging in special locations. You're made to feel good just from your habit of drinking coffee!” The same approach has been adopted by Jhonson Robert Company, by offering business consulting services specifically aimed at successful companies who want to grow exponentially, through the Jhonson Robert Consulting. They offer educational services for courageous and talented entrepreneurs, managers and students in three different languages (English, French, Italian) through the Jhonson Robert university, a university recognized and accredited since 2011, and offer training in lifestyle medicine considered a pillar of future medicine for doctors and health care for people, through the Jhonson Robert lifestyle medicine brand.

The global vision of Jhonson Robert Company, Heal the World is their goal: “Never before has there been a need to be Leader A4H: Crisis, market problems, difficulties in competitive contexts,” says Robert. “For companies, the last few years have been characterized by increasing turbulence. And the world to come will be even more turbulent and requires a radical change at the top of the primary companies.” Robert and his team help clients to add value, achieve their dreams and business objectives, by giving them the skills and the courage to implement ideas that can create a sustainable future through a program called Leader A4H (Awareness, Head, Heart, Hand, Health). “With our A4H program you can build your future and the future of humanity, we are determined to prepare leaders for the turbulent world that awaits us,” he explains. “For us, the A4H program is of fundamental importance as the beginning of a relationship destined to create a huge advantage in the future of our client organizations. The program is unique, challenging, rigorous and absolutely the right preparation for future success.”

" The Jhonson Robert Company was born in 1996 from the desire to promote well-being within the workplace, a balance between profit, well-being of people and the planet."

According to Robert, their successes have been derived from a very simple concept: ‘never sacrifice your own well-being for work as an end in itself, especially if you don't love what you do.’ Jhonson Robert Company is committed to creating business without sacrificing the well-being of people and the planet. “Every day at the Jhonson Robert Company, clients plant seeds for a bright future, learn how to solve complex problems, expand their perspectives, and collaborate with people very different from themselves,” adds Robert. “We call that the Jhonson Robert Company difference. You will call it the opportunity of a lifetime.”