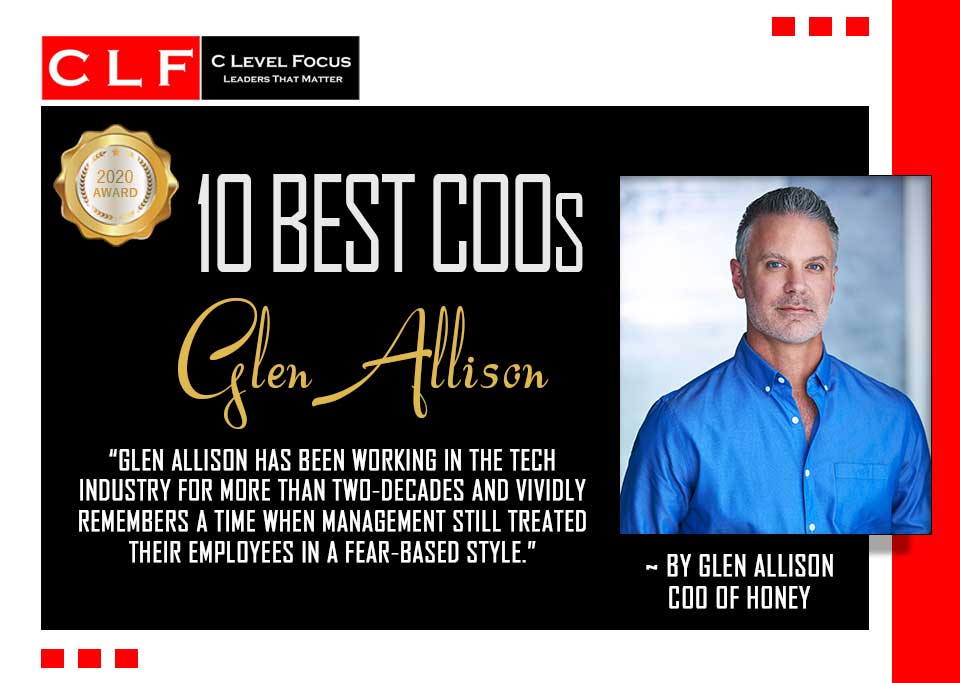 “The People First Approach to Scaling a Multi-Billion Dollar Company”

Glen Allison has been working in the tech industry for more than two-decades and vividly remembers a time when management still treated their employees in a fear-based style. “I can remember a manager of mine yelling at me in a meeting room full of people, over some coding challenge we couldn’t solve”. It was at the moment, Glen realized he didn’t want to work in a company that didn’t have his best interests, as an employee, in mind. Fast forward to 2015 when George Ruan and Ryan Hudson, founders of Honey, asked Glen to become their first and only COO, and build a company that would be the best place anybody had ever worked. “We decided that building a great company meant giving employees the opportunity to grow and learn, and be challenged by things they never thought they could achieve”. Growing Honey from 20 people to over 400 in a few short years, and selling the business to PayPal for $4B in 2020, helped validate that approach. “We’ve been very fortunate along the way to hire some of the best people any of us has ever worked alongside. We hired people that had strengths where we had weaknesses, and built a system of open feedback. Embracing that feedback ultimately made all of our employees better. It’s not easy hearing things about yourself that aren’t working, but it’s truly the only way to grow”.

Glen started his career at AOL, as a software engineer during the internet’s infancy. It was there he was exposed to hyper-growth, and a realization that you can adapt to change, embrace it, or get left behind. “Working at AOL really taught me how absurdly fast technology moves, and how to really be rewarded by growth. I’ve always realized that when an employee approaches me and is unhappy with their compensation or title, it’s usually not about that at all. They’re generally comparing themselves to somebody who isn’t performing with a higher title, or they’re bored, or they want more challenge. The titles and compensation come along if you’ve trained your managers correctly to delegate, recognize, and be proactive”. As a result, Honey had invested a large set of resources to Learning and Development and Manager training. “Having your employees operate in constant growth mode requires work from management, to clear the table of obstacles for your team, to ensure communication is clear, and alignment is paramount”. This is something Glen has refined at AOL, Good Technology (sold to Motorola), Microsoft, and Twitter (via Gnip acquisition).

“Glen Allison has been working in the tech industry for more than two-decades and vividly remembers a time when management still treated their employees in a fear-based style.”

“I’ve been fortunate to work at some of the most notable companies in the world, and have always left with a few lessons on what I liked about the companies, and a few about what I didn’t like. When given the opportunity to help shape Honey’s culture, it was really clear that a ‘People-First’ approach would give us an edge. It took a lot of conviction to stand by the Core Values of the company during trying times, but ultimately, it helped shape our company. We’ve been recognized as the #1 place to work in Los Angeles multiple years in a row, and we’re proud to have achieved that while doubling the employee population”.